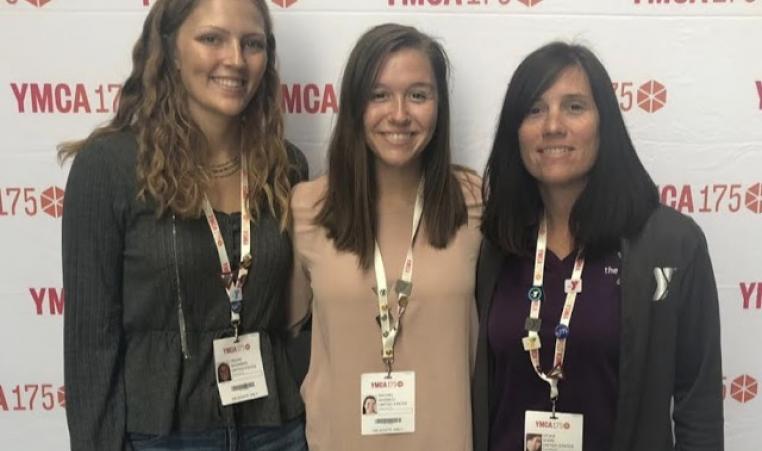 In YMCA's landmark anniversary year, YMCA175 brought together thousands of young leaders back where it all began in London for several days in August.

“It was an honor to be asked to represent the YMCA of the Suncoast and it was very inspiring to see how the Y serves others on a global level,” said Youth Community Engagement Director Vickie Shire. “It was my very first trip to London. It was beautiful. We went to visit the actual first YMCA and it definitely had its upgrades. The outside was still kept traditional. It was funny how the outside looked one way and the inside was, ‘oh we’re up to 2019 now.’”

Vickie chose two volunteers to join her; Rachel Basmaci from the Clearwater Y and Tegan Showers from the North Pinellas Y. “It was nice to see Rachel and Teagan get the different cultural aspects from other young leaders and see what they’re doing, learn new ideas that they can bring back to their YMCA and hopefully impact our community globally,” Vickie says.

Rachel even had the opportunity to lead a Wellness, Leadership, and Advocacy: How Youth Can Change Communities workshop with around 60 participants.“My goal was to correlate the eight dimensions of wellness, leadership tactics, and advocacy goals and participation to the massive changes youth can have in individuals, communities and policies within each community, by using personal or YMCA-related experiences,” says Rachel.

Vickie says she was also inspired by one guest speaker who asked participants what they wanted to be when they grew up. The answer: YOU! “It was very impactful. You have to be you. It was nice to hear that when you grow up you want to be me, like you want to be you, and that’s ok and there’s nothing wrong with being you,” she says.

More than 3,500 young leaders from Ys around the world attended the event. “It put a light back in me. It was nice to be inspired and see other young leaders and other adults there trying to work toward the same goal but doing it a little differently and adding their own little twist to it,” says Vickie. “That’s what it was about; showing support to our youth and giving them opportunities to be leaders because they are our future and they will be the ones making the difference.”

“It furthered my dedication to providing youth a channel to lead, inspire and grow,” Rachel says.

Vickie hopes to bring a program back to the states that is currently just offered in England which focuses on teen mental health.