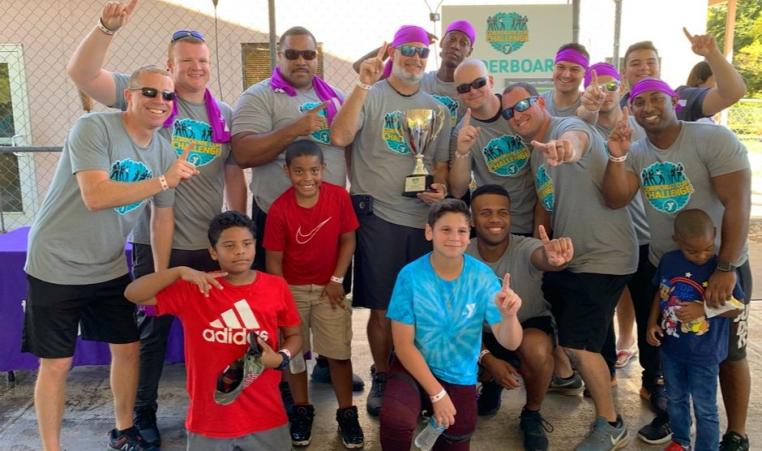 Guess who won the trophy and BRAGGING RIGHTS? The Hernando County Sheriff’s Office...that’s who!!!

“We will definitely be back to defend the title, you don’t have to worry about that,” says Hernando County Sheriff’s Office Cpl. Justin Beetz while holding the trophy. “I had fun competing against everyone and hopefully you’ll get even more teams to come out and make this a bigger event than it already was next year.”

“Going into this we didn’t know what to expect but we ended up rolling with it and we had a lot of fun,” she says.

In addition to more than $13,000 in sponsorships from the YMCA’s presenting sponsor Lema Construction, and additional sponsors Baycare, the Hillsborough, Pasco and Pinellas County Sheriff’s Offices and Subway, who provided sandwiches, there were a total of nine teams participating and almost all teams appeared to take on each challenge with gusto and a desire to win.

Here was the Leaderboard from first to ninth place:

Randy McElwain Nilsson, Vice President of Membership & Corporate Partners for YMCA of the Suncoast, says it was so much fun to see the enthusiasm and team spirit on display from everyone.

“I think the turnout was awesome today. We had nine teams participating more than 40 volunteers, and half a dozen event sponsors. What a success. We were blessed with a beautiful day,” says Nilsson. “This event is only going to grow. This was our first time doing it. The teams had a great time and we’re going to see many more teams next year.”

This was a Tampa Bay Area YMCA event as part of its "Partners In Wellness" program, which serves over 275 companies across the Tampa Bay Area in an effort to improve the health and well-being of their employees and their families.

The YMCA of the Suncoast supports corporate wellness and the YMCAs of Tampa Bay's Corporate Partnership Plan makes it easier than ever for your employees to be active, healthy and more productive by belonging to the YMCA. Click here to learn more.